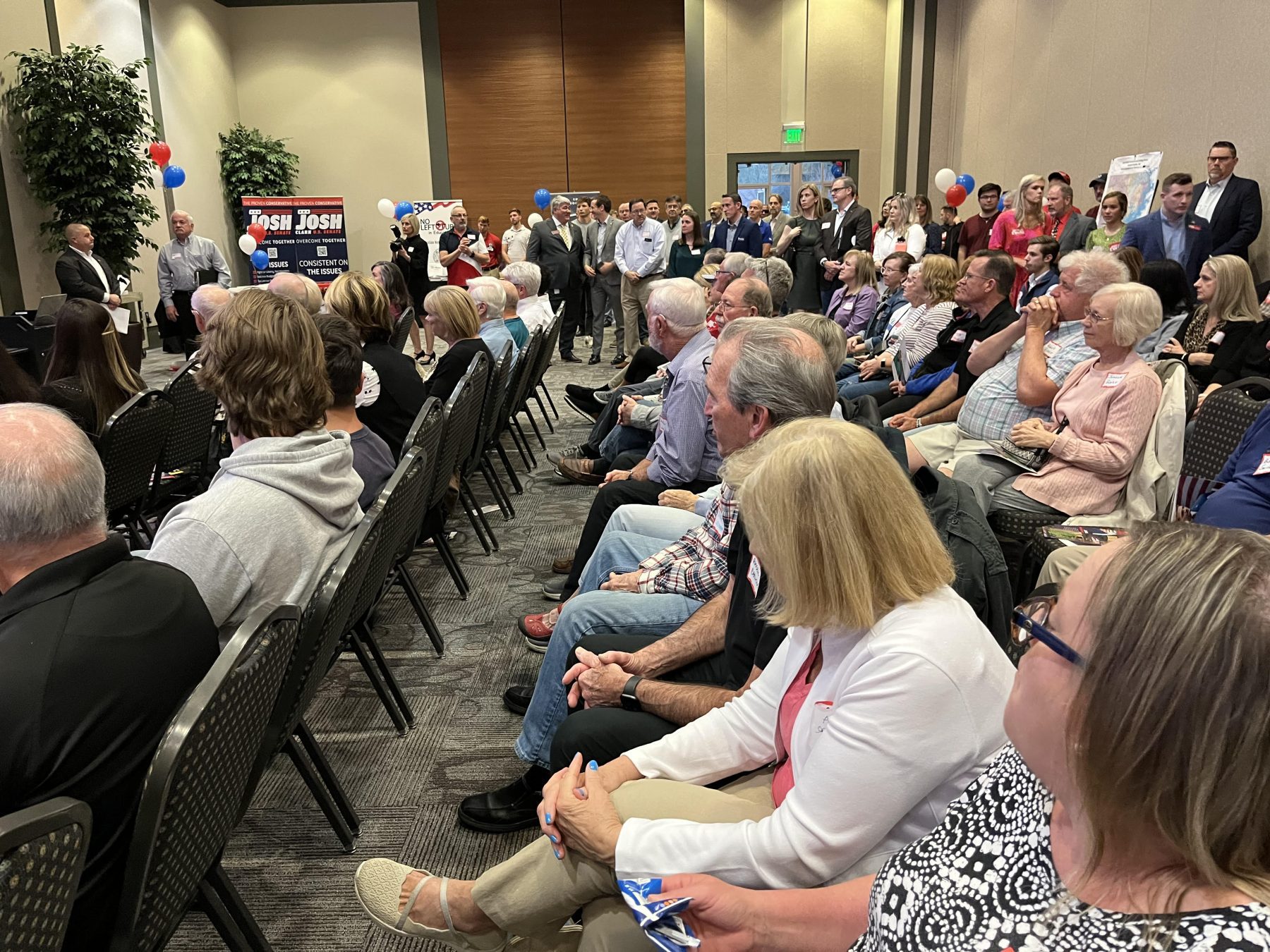 Approximately 300 people attended. About 200 were seated while another 100 or so stood during the entire two-hour event to hear the candidates – Jake Evans, Dr. Rich McCormick, Meagan Hanson, Blake Harbin, Mallory Staples, Suzi Voyles and Eugene Yu – make opening and closing statements and answer questions, during the two-hour event.

Michael Valdes, Chairman of No Left Turn in Education and a candidate for the Board of Education, served as moderator. He laid the ground rules and explained that the evening was to give candidates an opportunity to introduce themselves but not to debate each other.

Before introducing the candidates, Valdes said, “This is what America is all about. America is truly at a crossroad. This is going to be the fight of our lives. What happens in the next 5-10 years will determine what this country looks like for the next 30 years.”

To begin, each candidate was given three minutes for an opening statement.

While the candidates agreed on many  issues like protecting the unborn, securing the border, funding law enforcement, stopping the teaching of critical race theory in schools, dismantling the Department of Education, and protecting the Second Amendment each brought their own unique qualities to the race.

Evans, an attorney, he has fought for the religious liberty and election integrity. In 2020, he fought to count only legal votes in Pennsylvania all the way to the U.S. Supreme Court during President Trump’s campaign. He is the only lawyer in Georgia to have a superior court judge overturn results of the same election twice. “As I look at the future of our country, I realize the heart and soul of America is on the line in 2022. Liberals are seeking to defraud the American people.”

McCormick is a decorated U.S. Marine in who served in combat zones in Africa and the Persian Gulf. He is also an emergency room physician who wants to fix problems that are hurting the healthcare system. He also called for a Parents Bill of Rights at the federal level, you should be in charge not the government. He added that government schools are “not teaching kids how to succeed they are teaching them how to think about equity. I am not interested in co-parenting with the government.”

Hanson is an attorney and the only candidate in the race who has won an election, having defeated Democrat Taylor Bennett in the 2016, in the Georgia House District 80 race. It appears education will play a major role in her campaign. “I’m not standing by when I can’t trust schools to teach my kids anything but CRT,” she said. “This is not what I paid for. It is not what you paid for. Something has to change. The time is now.”

Harbin casts himself as an outsider who knows how to overcome adversity. A car wreck in …. Confined him to a wheel chair, but he has succeeded as a small business owner who has suffered under Biden’s economic policies. “Our country is under attack,” he said. “Biden and the Democrats are waging war on our way of life. What we believe in is being destroyed. Our borders are open. Crime and violence are rampant. Parents have no choice in their children’s education. In just one year, Biden’s economic policies have destroyed families. It is now harder to put food on the table and gas in our cars.”

Staples defined herself as a “citizen leader” who graduated from the University of Georgia and was a small business owner for 17 years. She is a former teacher who is very active in a women’s Christian ministry that serves military and law enforcement widows. She said she chose to run for Congress after she experienced anger then rage over what was happening under the Biden Administration.  “I’ve had enough,” she said. “Now is the time for Americans to stand up for our country stop apologizing for our beliefs and protect our way of life. She also called for dissolving the Department of Education.

Voyles is a former teacher and Fulton County poll manager who has said she saw potentially counterfeit ballots during the 2020 Presidential Election. She also said, “It is about time we divest Washington of the power that isn’t theirs. It is the people who have the rights. It is not the government that has the rights.” She added, the first thing she wants to do is to dismantle the Board of Education. “The insidious things that are coming out of there are wrong.”

Yu is a retired business owner, published author, U.S. Army veteran, former deputy sheriff and firefighter who came to America from South Korea 44 years ago. “Republicans always say we need to reach out to minorities. We need diversity. Guess what? Here I am. Let’s do it. Let the whole world know the 6th District is reaching out to minorities.” Yu also stated the federal government has no business being involved in education.

Following the event, Valdes said, “I think they were phenomenal. Just about all of them are super strong. Like every group, there are some standouts, but I think there is definitely some strong competition, some very qualified people with good ideas. It’s probably the most conservative group of candidates we have seen in a long time.”