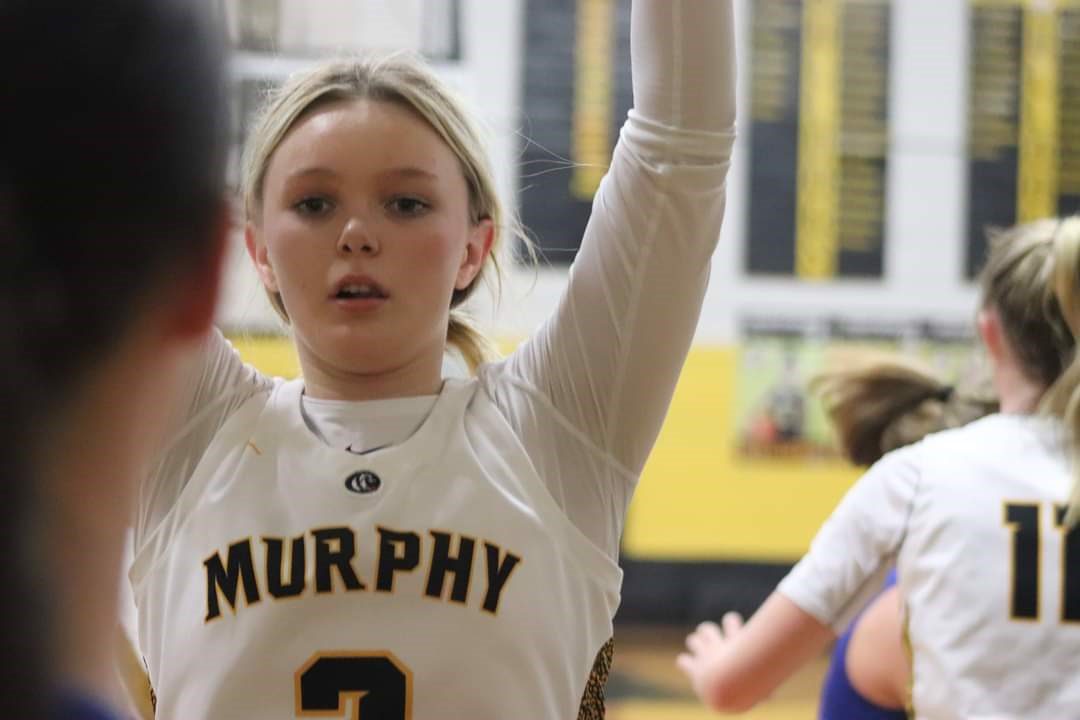 (Murphy) – – Thunder and lightning rolled across the floor and then the rain came and caused all kinds of problems for the visitors from Stanley County.  When the clouds parted the dust settling atmosphere left one Lady Bulldog team standing among the states 1-A girls elite eight, or game one of the Regionals.  This is not a weather report, but it is a description of the 66-to-36 win Murphy’s Lady Bulldogs (26-3) made over the Albemarle Lady Bulldogs (19-8) Saturday night.

The Rogers sisters found a good offensive one-two combination punch to give Albemarle frustration.  Albemarle used its speed to break the press and get to a location where they could drive in for a shot, which only worked three times in the first half resulting in six points from the floor.  Most of the times when ball fell out of the hoop.  The 6’1 Torin Rogers would be at the post to pull down the rebound, which is the thunder as her feet hit the floor with the ball.  During this time, sister Lochlan would ‘snowbird*’ on the other end of the floor waiting for coast-to-coast pass from Torin.  The lightning was the quick two points Lochlan would post, to make Murphy and Albemarle fans stare in wonder.  This worked out about five times through the entire game. The ‘Thunder n Lightning combo helped Murphy launch a 14-to-nothing run to build the score 14-to-5 at the end of the first period.  The combo was a contributing factor for Murphy to enjoy a 38-to-11 halftime score.

*Snowbirding.  A gentleman at the game came to our Team FYN Sports broadcast setting and asked if we believed younger generations knew what snowbirding was in basketball.  It’s not playing a game on the Cherokee Indian Reservation land in Graham County.  I like the Urban Dictionary term.  For those of you who don’t know the term to snowbird, here it is… https://www.urbandictionary.com/define.php?term=Snowbirding

Then the rain came

Thunder and lightning are warning signs the rain is coming.  It did arrive.  Albemarle had to scramble to cover drops of Addie Johnson, Lailee Holloway, and Emma Ledford.  A big difference from the Albemarle game to Thursday night’s meeting with Mitchell County, Murphy could throw the ball up in the air and it would generally come back down as sunshine.  Wait a minute we were describing it as rain, but three-point shots from Emma, Addie, and Lailee were golden for Murphy.  Another important raindrop was a better free throw shooting night than what we witnessed in the Mitchell County game.  Murphy buried 13-of-19, a great improvement from the 40% shooting from Thursday night.

You may know with any storm comes the wind.  The Murphy defense was strong enough to blow a mess of Albemarle turnovers and steals.  Albemarle had tremendous speed and fearless players like Amari Baldwin and Bianca Robinson, who are very talented Freshmen.  They are team leaders for scoring, rebounds, and assists.  The toe-to-toe, full-court, diamond press defense was a wind that pushed Albemarle out of its comfort zone for scoring. 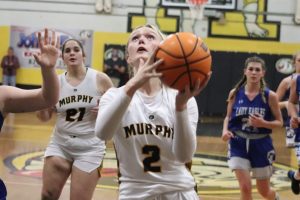 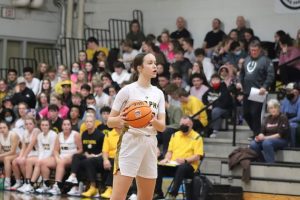 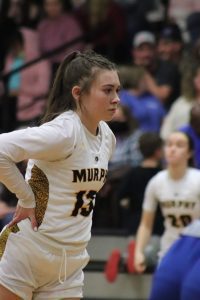 Scoring (as recorded by Team FYN Sports and not official)

The Villains are coming to town

Bishop McGuinness is the next opponent for Murphy.  The Lady Villains, number 5 seed, upset 4 seed North Rowan Saturday afternoon 66-to-47.  Bishop McGuinness is going to be a tough customer for the Murphy Lady Bulldogs.  This team is well coached and has some highly skilled youth that can pop a three-pointer on demand and easily take control of a game.  Freshman shooting guard Adelaide Jernigan cranked out a career-high 33 points, including 8 of the 11 three-point jump shots made by the Villains.

Jernigan will be a player to not leave open, which may lead to more man coverage by Murphy.  Cover Jernigan and you will need someone to watch over sophomore forward Kiersten Varner who chipped in 13 points for Bishop McGuinness.  The first half was not an easy one for the Villains.  North Rowan’s Cavaliers held the game close at the half, trailing 37-to-31.  Bishop McGuinness adjusted its defense and limited North Rowan to 7 points in the third and 9 points in the fourth to strangle Cavalier’s offensive strike.  The Cavalier defense left Jernigan open too much in the second half to allow her to score 18 points, which was more than the North Rowan’s total second half scoring.

Team FYN Sports coverage will begin around 5:40 PM on Tuesday night for the 6PM tip off with Murphy and Bishop McGuinness.  Jake West and Brandon Stephens will call the action at https://fyntv.net/ .  We hope you make it to the game, but if not, Team FYN Sports has you covered with a front row seat.