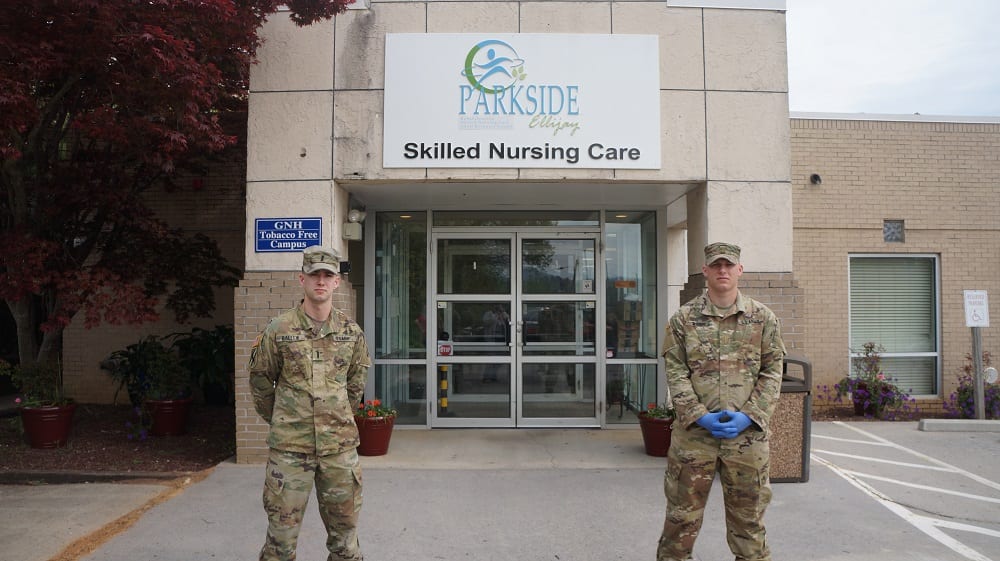 ELLIJAY, Ga. – Soldiers and Reservists from the National Guard met in Ellijay today as part of a running program from the state to help clean, sanitize, and train staff at Parkside Ellijay. 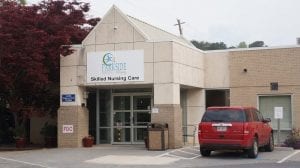 Parkside Ellijay Skille Nursing Care is one of the facilities being cleaned and sanitized by Georgia’s stations of the National Guard.

The facility is only one of many that Lieutenant Jacob Mizell of Bravo Troop said his team has and will visit during the Coronavirus outbreak. Receiving the call only last week, these reservists were in action in a day.

Today, they went into Parkside Ellijay spraying down, disinfecting, and sanitizing hallways, railings, counters, and other high touch areas. But they also visited each of the 100 rooms to disinfect areas of the residents’ rooms as well. Lt. Mizell said they were working with the owner of Parkside to accomplish whatever the need dictates.

Lt. Mizell said, “Their staff can’t really stay at home in isolation because these facilities need their staff here to make sure that their residents get medication and food and any sort of care that they need. So, we’re doing our part to help the state, to help the community, and to help the citizens of Georgia.”

Lieutenant Nathan Ballew of Charlie Troop said the operations are a little bit of both cleaning and education at the facility. The guard is doing the actual cleaning, but they are also educating the staff on procedures, cleaning, decontamination suits, and mask usage. A process that owner Michael Feist says is more than welcome as the facility wants to take all the help for its residents as possible.

The teams come through the facility with minimal impact on residents but slight impact to staff, who may have to avoid certain areas or hallways for several minutes during the process.

Depending on the facility size, the process could take two to three hours, and this team that came to Ellijay is based in Canton, reaching out and visiting facilities in a radius around their station. They hit two facilities each day, but currently have no plans or orders to return to facilities after completion.

Lt. Mizell said his unit has already visited eight facilities in their current tour. But their unit has two teams operating from Canton. Each team has 15 total soldiers.

Lt. Ballew said they are just a small part of the National Guard that is mobilized right now.

Lt. Ballew went on to add that he has personally been a part of responses for hurricanes and other disasters, but “It’s very similar because it’s just maintaining that flexibility to do whatever the state needs for us to help. That’s one of the most important parts of maintaining a National Guard.”

“We’re proud to admit that we have no cases. Nobody has tested positive and nobody is showing symptoms in the entire building. Nor have they shown since the beginning of this epidemic.” says Feist.

More than just the National Guard’s efforts, Parkside has made major changes in recent months including an outside chair and window visits for family as no visitors are allowed inside the building. Though they have cancelled some events, social interactions are still continuing through events like hallway long bingo nights and turn-based visits to the courtyard and bird feeders.

Parkside has halted renovations since the beginning of the epidemic and has even worked alongside public safety for potential plans for unused medical space should a need arise. They also maintain a rolling updated training regimen for staff on infection control and just completed a new update in recent months before the outbreak. Education and training are also continuing with the Guard during today’s visit as time permits.

The mission isn’t just to sanitize and clean, but to educate, according to the two Lieutenants who reiterated that they wanted citizens to know that the process is about “flattening the curve.” A phrase many have heard in the media. Providing a service is what guardsmen sign up for as Lt. Ballew and Lt. Mizell said they are here to help.