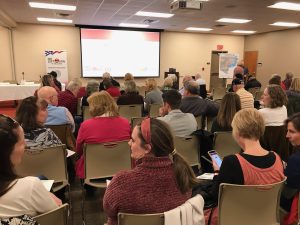 Featured guests included State Senator Greg Dolezal, State Representatives. Sheri Gilligan and Todd Jones who talked about what is happening during the current session of the Georgia General Assembly. Mike Valdes, who has announced his campaign for the Board of Education, served as moderator.

Jones talked about how suicides had increased by 200 percent in the counties he serves since the pandemic. He also talked about the Mental Health Omnibus Bill he sponsored along with Democrat Mary Margaret Oliver. The purpose, he said, is to move Georgia from 49th in the nation in treating mental illness to near the top.

The bill has such bipartisan support that some legislators believe it could pass unanimously. Jones spoke of an incident in which his son, who suffers from mental illness, was nearly killed by a police officer while brandishing a firearm. The officer was able to talk him down and he was transported to an emergency receiving facility. Advocates who represent 15 agencies that deal with mental health issues say the bill will save lives.

Gilligan talked about the difficulty in getting school choice passed, “In 2018, we had a school choice bill that went down in flames,” she said. “We had over 120 Republicans and we had only 60 votes (for school choice) and two of those were Democrats. We ran on it. We campaigned on it and when the rubber hit the road, we ran away. I don’t know why people decide not to stand for the principles on which they run.”

She also talked about two bills she strongly supports (HB 1158 and HB 1178) both entitled the Parents Bill of Rights. 1158 would require schools to establish transparency regulations and a procedure to allow parents to access their child’s health and school records. It would also ensure parents’ right to know what their children are being taught in school; a right to examine curriculum and any supplemental instruction materials; a right to withdraw their child from sex education courses. It would require schools to obtain a parents consent in writing to a biometric scan of their child and before any record retention of blood or DNA. “It has the language that puts parents in control.”

“The only way we’re going to get a hearing on 1158 is for you to write Rep. Matt Dubnik ([email protected]) who chairs that committee and ask him to please give the bill a hearing.”

On critical race theory (CRT) Dolezal said, “There is something different happening. I’ve seen videos of the Board (of Education) meetings and there is an awakening happening. Somebody woke up the mama bear around this critical race theory. The battle, in my opinion, for the future of this country over the next 10 years is at the local Boards of Education level. At Boards of Education all across this nation, some a body woke up mama bear and she is not going to go back to sleep.”

A question addressed to the legislators was “Why is this issue of obscenity in schools a legislative matter rather than a law enforcement matter?”

Gilligan explained that public school libraries for years have been granted an exemption from obscenity laws. “The better question is why did we make an exception. The answer is I don’t know but that is an exemption we are trying to get rid of.”

Bob Rorke nearly brought the crowd to its feet in wild applause when he suggested, “How about if we write some laws in Georgia where we can have superintendents elected by the people along with the boards.

Gilligan said there is a House Resolution being considered that would give local school districts the option of electing their superintendents.