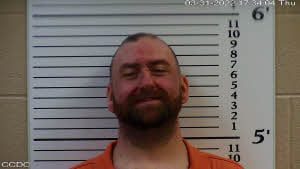 MURPHY, NC – A repeat offender from Georgia has finally been arrested in Cherokee North Carolina after 50 break-ins in the Cherokee County area.

According to the Sheriff’s Office, the break-ins were not his only encounter with the law.

“In January 2022 while Smith was being transferred from a local health care facility to another one in Western North Carolina, it was reported that he stole personal items including financial cards of the health care worker in Cherokee County. Once Smith was cleared to be incarcerated he was arrested on the charges from the earlier theft. Smith was released on bond on an unsecure bond March 26, 2022.”

The day before his arrest, Smith was spotted during an attempted break in when the owner of the residence observed him and saw him run from the home.

Also, during the night of March 30, 2022, ‘several other vehicles and buildings were broken into’.

“Additionally, while the responding deputy to one of the reported breaking and entering found the release order that was given to Smith at the time of his release on March 26, 2022,” according to the Sheriff’s Office.

Smith was arrested and booked into the Cherokee County Detention Center on five accounts of breaking and entering a motor vehicle.

Chief Deputy Joe Wood stated “I want to commend the work of the Patrol and Investigations Division. The team work helped bring this situation to a close quickly. We continue to investigate several more break-ins in connection with Smith’s crime spree. As always we appreciate our community’s support and if anyone has information please contact Detective Teasdale or Detective Fry at 828-837-2589.” said Chief Deputy Joe Wood.