ELLIJAY, Ga. – This weekend saw posts from the Gilmer County Sheriff’s Office and others sharing information about the implementation of downtown Ellijay’s newest traffic calming device being a four-way stop at the intersection of North Main Street, College Street, and North Avenue, right next to Ellijay Elementary School.

In addition to these posts about the four-way stop, Ellijay Police Chief Edward Lacey took to social media on the department’s page to explain a few items about the stop. 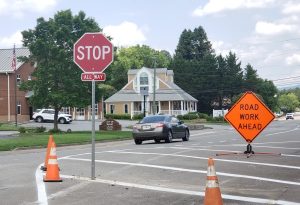 Road work is continuing as the city puts the finishing touches on the new four-way stop on North Main Street next to City Hall and the Ellijay Elementary School.

Not the first attempt at traffic calming in the area, Lacey said that the city’s attempts to increase safety in the downtown area have come from major pushes by residents and business owners in the area. The city has long looked for ways to help with pedestrians and traffic flow in the area and has gone through several improvements that are not all visible all the time. Talks turned in years past to additional crosswalks and other methods that weren’t implemented.

The city erected signs in the middle of River Street at one point instructing drivers to stop for people in crosswalks. The city more recently has erected speed limit signs with built in radar highlighting drivers’ speeds as they enter the downtown area. Now, the addition of the four-way stop marks the next step, but certainly not the last. Lacey confirmed for those who don’t know that a raised crosswalks/speed-tables will also soon be implemented on North Main Street soon.

Another change in the area that isn’t always visible is the continued safety meetings and joint efforts from law enforcement from different jurisdictions during major events like Light Up Ellijay. In past years, law enforcement used roads like North Main and College Street to create an outer circle to help flow traffic around Ellijay’s downtown area after the event’s completion in order to help ease congestion on the roundabout and to quickly empty the core area.

The four-way, up now, comes just before a major event for Ellijay in the form of Independence Day. The first major event of the year since the schools across the state have hit graduation, this will see an uptick in traffic. However, as the city gets used to the new stop, Lacey did offer drivers a reprieve saying that the city police won’t be writing citations for non-crash violations at the new intersection 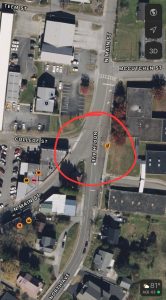 Posted by the Gilmer Sheriff’s Office, this top-down view of the area highlights the intersection where the city’s new four-way stop sits.

for 30-days. However, this does not mean that police won’t initiate traffic stops for violators as the offer warnings in this time period. Lacey stated that he wants to avoid increasing citations with the new stop saying, “We had rather look for ways to bring about voluntary desirable behavior rather than be placed in the position of using negative reinforcement.”

This means that the July 4th weekend could likely see the end of the grace period and the beginning of citation enforcement.

Speaking on the continuing changes to traffic and the downtown area, Lacey commented on both the positive and negative responses the city is already seeing. He noted, “The hard reality is that there have been both an increased number of pedestrians and an increased number of vehicles upon our roadways. Regardless if the reader “likes” or “dislikes” the increase in numbers, the fact remains; we have more people and more vehicles upon our roadways than in any time in the history of our city.”

While the four-way stop is designed to slow traffic and give drivers time to look around, Lacey said that there are still other factors involved. Both drivers and pedestrians are traveling while distracted by their cell phones. He said, “Combined, speeding and distracted driving/walking creates extremely dangerous conditions. When we increase the number of pedestrians and the number of drivers with the previous scenario, we have a recipe for disaster.”

No traffic device will solve these issues, and Lacey acknowledged that these efforts mean additional changes and response from the city that will definitely not be popular with everyone. The Ellijay Police Department has already responded to the growing number of comments with additional information as they increase warning signs and temporary flags on some signs as well as working to add additional rumble strips on approach.

The city has also looked into the the return of school later this year. Part of the current redesign also moved to McCutchen Street where a lane redesign is the first step in efforts to aid in school traffic alongside the stop signs.