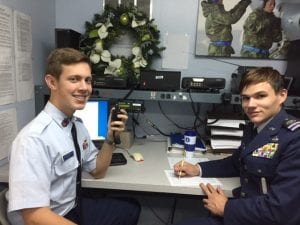 Every Christmas Eve since 1955, NORAD has tracked Santa’s journey around the globe for the enjoyment of children everywhere. Civil Air Patrol, celebrating its 75th Anniversary this year, is a sponsor of NORAD Tracks Santa and will use its high frequency radio system to be on the air for its members and follow Santa around the world. The net will begin at 7pm EST on 24 December on the evening channels. CAP members will supply weather reports to guide Santa and his sleigh. The web site for Santa is www.noradsanta.org and is operational every December and includes music and games and a countdown to the big day when it will use NORAD’s radar system to follow Santa’s movements on Christmas Eve.

In December, 1941, one week before the attack on Pearl Harbor, Civil Air Patrol was founded by citizens committed to using civilian aviation to help bolster the nation’s defense. CAP patrolled the coasts for enemy submarines, performed target towing for the armed forces and flew courier missions. Civil Air Patrol is now part of the Total Force and performs 90% of the search and rescue flights in the United States. In 2014 the US Congress awarded the Congressional Gold Medal to CAP for its service during World War II.

NORAD, the North American Aerospace Defense Command, is a joint United States and Canadian organization charged with the mission of aerospace warning, aerospace control and maritime warning for North America. NORAD’s slogan is “We have the watch.”

To listen to the CAP broadcast, go to the link www.noradsanta.org and look for “library” (the book graphic) on the left, then to “Holiday Activities.” Scroll down and look for the elf. You should find “Track Santa on the Radio”. You can listen to the streaming of the Civil Air Patrol broadcast.

For additional information, including membership in Civil Air Patrol, go to www.gocivilairpatrol.com. There are squadrons located in Ellijay, Dalton and Blairsville and throughout Georgia.