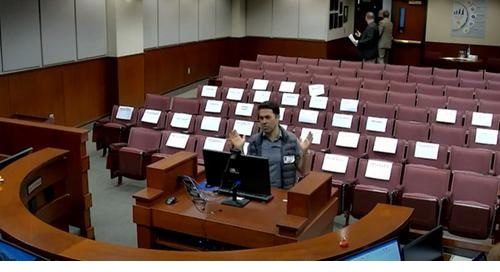 FORSYTH COUNTY, Ga. – The Forsyth County Board of Education appears to be on shaky ground with respect to its conduct of the March 15 meeting and Georgia’s Open Meetings Act.

After ordering the meeting room cleared, Chairman Wes McCall, who will run for reelection in the May 24 General Primary, allowed 11 public speakers to address the Board one by one in front of an empty room. He then called for an executive session to discuss personnel matters which is allowable under the Act. But, following the executive session, McCall called the meeting back into session and with the room still empty, he called for a vote which does appear to violate the Act.

McCall, who is up for reelection in May, demanded the audience leave after a fiery and impassioned speech by Angela Hair who demanded the Board remove books that contained obscene and overtly sexual content from the school libraries.

“I’m begging, begging, begging you all to do something,” she said. She challenged Board members to take the books and read them to “your children, your mother, your preacher.”

Then she began reading the very explicit, sexual content of one book that can be found in the school libraries.

McCall immediately interrupted her and explained that reading the material was not allowed under the Board’s rules. “Why are you stopping me,” she questioned. “Don’t you like the filth you put into our libraries?” When she continued to read, McCall interrupted again saying this is unacceptable and he asked if she would follow the rules or “do you need to be removed.”

Members of the audience shouted in support of Hair but McCall banged the gavel repeatedly and called for security to clear the room.

School boards should exercise extreme caution when they move into executive session. Legal consequences can result if a public board is found to have reached decisions that should have been on an open public agenda.

One of the most common reasons for an executive session is the catch-all category of “personnel.” It is also the reason most often violated. Some boards will call an executive session for personnel reasons at the slightest hint their agenda for the evening is threatened. While hidden from public view, they decide what they’re going to say, who will say it, etc. That is a dangerous and illegal precedent.