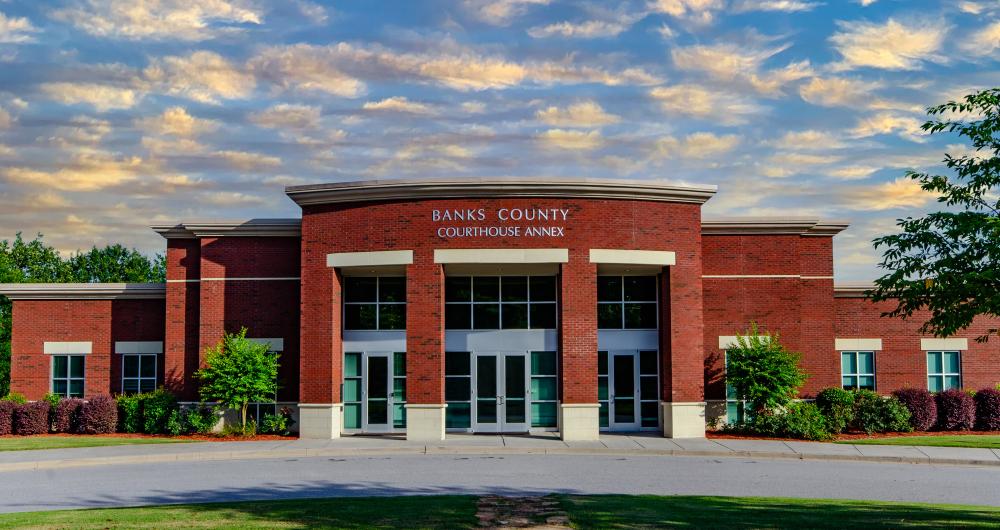 BANKS COUNTY – Citizens of Banks County filled the room of the March 8 Board of Commissioners meeting to oppose tabling (for another 60 days) a proposal by International Development company PNK Holdings, LLC, based in Moscow, Russia. Mark Stiles, representing PNK, was addressed by the commissioners and citizens alike with skepticism.

Representing PNK Holdings, Mark Stiles came before the county to present the corporation’s case for rezoning four parcels to the planning commission, the BOC, and the citizens.  According to Stiles, “It’s a country club industrial park.  People drive by, they don’t know, ‘is it a country club or an industrial park?’ Because we made all kinds of  special landscaping, azaleas, crape myrtles, a four-board horse fence to soften it, because we know the communities; how they feel about this kind of thing. Absolutely,” Stiles said”

Later, a citizen responds to the country club comments, saying, “I was going to ask if they’d ever been around Banks County, and if they look around the room, we’re not exactly a country club crowd.  We don’t care that it looks like a country club, we care about our animals, our wildlife, and our farms.”

Commissioner Bo Garrison responded plainly, “But our community’s main concern, I feel like, is over traffic; not how your landscaping is and all that.”

Banks Crossing and its surrounding I-85 corridor has notoriously bad traffic. It is a popular destination for truckers travelling to and from Atlanta.

Garrison hinted at the notion that the proponents of the proposal had mislead the Board.

“The first time I saw any drawing on it, it was something possibly workable.  Then all of the sudden, y’all come back with a white elephant.  And I ain’t eating a white elephant, sir.”

Commissioner Danny Maxwell also expressed his concerns about the apparent changes in the proposal.

“I talked to y’all that day about particular businesses that were coming in. We wanted to know what businesses. There were one or two mentioned which I thought would be very successful here. But as of now, all of that’s changed with all of this conglomerate with six million square footage of floor space over there. I noticed there were three entrances on 63 and one on Neal Road.  I don’t like that…we’ve got to be able to control what comes into Banks County,” Maxwell said.

Heavy Industrial uses like distribution centers clog up local roads with truck traffic and lead to more noise and air pollution in the close vicinity. This is not a huge problem in some areas. The issue here is that the use proposed was too large for the area and it clashes with the surrounding uses.

The commissioners expressed interest in a moderate use like a small commercial center, a self-storage unit, or other similar, less caustic developments. The county is not disinterested in new project. In fact, new business appears to be welcomed by most, but it seems the consensus is that Banks County should be seeking businesses that fit well in the spaces available with as little harmful impact as possible.

The citizens who attended made sure to voice their opinions and cite the facts of the situation.  They deferred to the county code, the comprehensive plans, the local use impacts, and their own hearts and convictions.

A moving site unfolded as one citizen, Stanley Beasley, used the attorney’s words against himself.

“I’m going by what the gentleman said himself, it ain’t his problem… [those] people on the backside, that ain’t his problem…how they’re going to get to their property; that ought to tell you something right there. He ain’t for nobody in Banks County, I don’t care what he says.  He can’t tell us what’s going in [those] buildings,”Beasley said.

Beasley then held up the tube to his oxygen and gestured towards the air.

Citizen after citizen gave many arguments against the project.  It seems the efforts of the locals were not in vein.

The Board of Commissioners ultimately decided to reject the proposal.  Therefore, if the company would like to continue the project, they must reapply.  The board made it clear that plans must be in a more concrete state, rather than being at the whim of the developer.