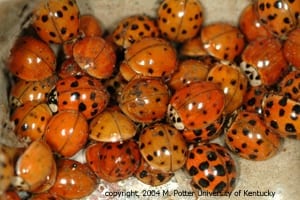 The multicolored Asian lady beetle (Harmonia axyridis) is native to Asia; but odds are you may have a group living in your home. Although sometimes mistaken for a ladybug, this insect has a wider range of colors and spot numbers than other ladybug species. Over the years, federal, state and private entomologists released the insect at a number of locations in an effort to naturally control certain insect pests. Their natural control of aphids in pecan orchards and some ornamental plants has decreased insecticide use against those pests. But their booming population makes these lady beetles unwelcome guests for many homeowners. The Asian beetle has a tendency to overwinter in homes and other buildings, sometimes in large numbers. According to the owner of Rogers Exterminating Co., a local pest control company, “You can treat your home but the most effective deterrent is successfully sealing up your structures.” Rogers also noted that “the invasions appear to be becoming worse and while we can spray homes we also recommend customers have a good vacuum cleaner.” If you decide to turn to a professional, Rogers Exterminating Company is one option for providing experienced service to help homeowners with this issue and can be reached at (770) 773-7708.

One of the more irritating traits of the Asian Beetle is the yellow fluid with the unpleasant odor released from its leg joints. This is a defense reaction known as “reflex bleeding.” This reaction may prevent predators from eating the beetles, but in your home, the fluid may stain walls and furnishings. Lady beetles are not structure-damaging pests; however, they will create frustration in the fight to evict them from your home. Unfortunately, there is no easy answer to the Asian beetle invasions. Using a vacuum, broom, consulting a pest control professional and sealing up your structure can provide relief, but still it will not prevent entry of every single beetle. This is not our native ladybug!